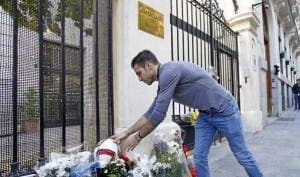 SPANISH footballer Cesc Fabregas has left his man-of-the-match ball outside the French embassy in Madrid.

The Chelsea midfielder – who was named man of the match in Spain’s 2-0 victory over England in Alicante – attended the embassy this morning to pay his respects to those killed in the Paris terrorist attacks.

France’s international friendly with Germany at the Stade de France was one of the sites targeted in Friday’s attack which killed at least 131 people.

Three suicide bombers blew themselves up outside the ground as security officials prevented them from entering.