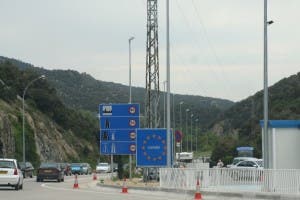 Driving a BMW M3, the men of Arabian decent, failed to stop at the border and were chased along the AP7 by Spanish authorities.

After a 45 minute chase, the men got away as police failed to keep up.

The border had been shut following Friday’s terrorist attacks in Paris.

It is unknown whether or not the men are connected to the attacks.