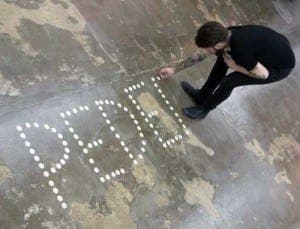 A TOWN hall is being threatened with legal action for allowing an anti-Catholic exhibition to take place.

The group claims the exhibit is ‘an offence against religious sentiments and desecration’.

Azcona, 27, displayed photographs of his theft from a local church and created the Spanish translation ‘pederest’ on the floor of the exhibition at Serapio Esparza gallery.

The CLA is warning it will sue the city’s council if it doesn’t remove the exhibition, while Azcona could face a prison sentence and hefty fine.

“If they don’t do it, we’ll expand the lawsuit to include charges of complicity,” said a spokesman.

More than 75,000 people have signed a Change.org petition demanding the council remove the exhibit, despite clear freedom of expression issues.

Hundreds of priests have been investigated for paedophile offences in Spain over the last few years.