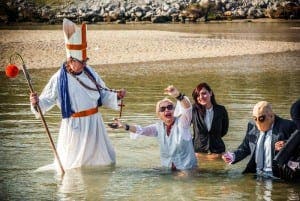 THE Pope has joined a group of activists protesting against climate change in Algeciras bay. At least, that’s what it looked like.

Members of environmentalist group Verdemar de Ecologistas en Acción sported a variety of interesting costumes for a ‘performance’ protest which they ended by submerging themselves in the Guadarranque river. Among them was someone in papal regalia topped with a mitre.

Although he wasn’t actually the Pope of course, Pope Francis did recently speak out against climate change ahead of the Paris summit of world leaders.

A Verdemar spokesperson highlighted the threat to the Campo de Gibraltar from climate change.

“Our extensive cork forests are seriously threatened with extinction,” the spokesperson said.

“The rise in sea level threatens to erode our beaches and pollute the land with salt.”

Climate change: When will we deal with the elephant in the room?

The Mediterranean has experienced record sea temperatures this summer: this could devastate marine life