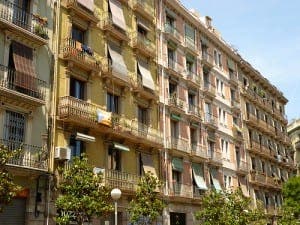 MORE people live in flats in Spain than anywhere else in Europe.

Two-thirds of Spaniards live in flats, putting the country ahead of Latvia (with 65% flat-dwellers), Lithuania (58%) and Greece (57%).

Meanwhile, countries such as Britain, Croatia and Norway are at the other end of the scale with just 20% of people living in flats.