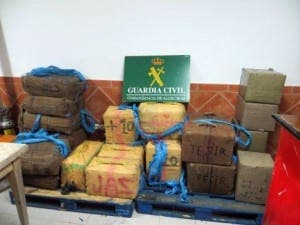 AN 810-kilo hash haul has been seized after a high-speed chase by police near Algeciras.

The driver eventually stopped and fled, and 24 bales of hash were discovered inside the abandoned vehicle.

A seven-metre long boat was later found at the beach, which police believe was used to transport the drugs from Morocco.

The vehicle had been stolen from Los Barrios in October.