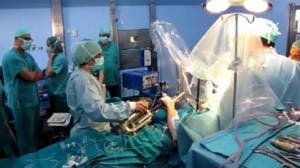 IT must go down as one of the most bizarre musical performances of all time.

Spanish jazz musician Carlos Aguilera played his saxophone to 16 doctors during a 12-hour operation to remove a tumour from his brain.

With a piece of his skull removed, doctors from Malaga’s Carlos Haya hospital instructed the 27-year-old to play his alto sax to ensure his musical ability was not hampered by the operation.

It was the first time this kind of operation had taken place in Europe and surgeons say it was a success.