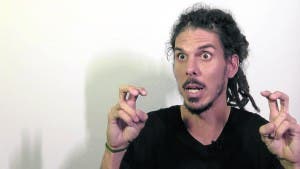 A DREADLOCKED politician is refusing to cut his messy mane, despite claims he might be carrying nits.

While Prime Minister Rajoy appeared to mock the appearance of the Podemos politician, deputy speaker Celia Villalobos went one step further claiming she might get lice from him.

An angry Rodriguez replied: “There are many people who cannot make ends meet, who will be angry to see [politicians] arguing over superfluous matters rather than policies to improve their lives.

“To me it’s just a hairstyle like any other, and I will only cut (the dreadlocks) off when I feel like it.”

Rodriguez was just one of Podemos’ many showstoppers in Congress on its opening day.
Carolina Bescansa breastfed her newborn baby, while leader Pablo Iglesias gave his customary raised fist salute.