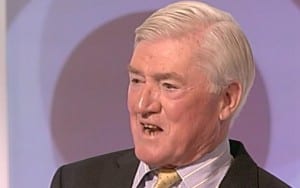 The former Conservative cabinet minister, who was a close friend and ally of Margaret Thatcher, was suffering from cancer.

The 84-year-old had a €1.3 million villa in the hills near Gaucin for many years and enjoyed its exclusivity.

He also fled to the Algarve in Portugal following the revelations that his former secretary, Sara Keays, was pregnant with his child in 1983.

In 2002 after a week in his Spanish villa, he told Scottish journalists that his affair with Keays was ‘virtually over’ a year before the baby, Flora, was born.

Parkinson, who was the MP for Enfield West, had been in line for foreign secretary until this development, and once feted as future prime minister according to Thatcher’s private papers.

Instead, he resigned and later became secretary of state for energy and transport.

WATCH: Firefighters rescue woman from zipline after she got stuck 40 metres in the air in Andalucia’s Gaucin