SHE has been criticised in the past for being too thin and too ‘serious’. 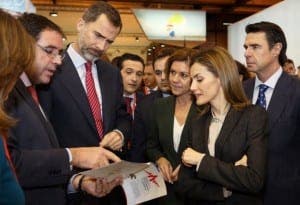 But glowing Queen Letizia was serenity personified and looked healthier than ever at the opening of international tourism fair Fitur in Madrid.

The 43-year-old mother-of-two later revealed that her new found zen was being helped by her love of yoga.

Talking at a stand for India, she explained she had been an avid Iyengar yoga fanatic for ten years.

And on top of that, she is a fan of meditation and stretching and regularly goes running and does zumba in the palace to keep fit.

The vegetarian newsreader-turned royal looked svelte as ever in a black suit and stilettos.