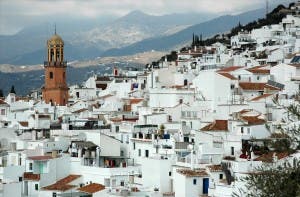 THE lure of the pueblo blanco is not solely reserved for expats searching for a taste of Spain.

The country’s national banks are also turning their attention to Spain’s towns and villages.

In a bid to make a quick buck, Spain’s banks are flipping cheaper property in small and medium sized towns and turning their backs on larger cities.

In the last 12 months Spain’s lenders have sold 66% of their property portfolio in towns of less than 50,000 inhabitants.

In fact 42% of the sales were in villages and towns with a population of under 20,000, according to property portal Idealista.

On the flipside, only 8% of all homes sold by banks were in cities with a population over 500,000.

A spokesman for Idealista said the figures represent a change in mindset from the banking sector.

“Banks have turned their backs on the old school of thought – buying expensive property in the city and selling it off for even more,” he said. “Instead they are buying cheap and selling off quickly.”

He added: “They may make less on individual sales but they are able to do it quicker and on a larger scale.”