AN inspiring restaurant staffed by disabled people, the brainchild of the late father of Catalan cuisine Santi Santamaria, is set to open this summer.

Friends and family of the first Catalan chef to earn three Michelin stars, who died in 2011, are pushing to open Universo Santi.

It is a haute cuisine restaurant which will offer some of Santi’s culinary favourites from his iconic El Raco de Can Fabes restaurant.

The twist: it aspires to be ‘100% staffed’ by people with disabilities.

The chef will be Angel Zapata of Barcelona’s Hofmann and names such as the Roca brothers, Martin Berasategui and Juan Mari Arzak are supporting the project.

The idea was sown two years ago and Abel Valverde, director of Santi’s Madrid restaurant, hopes the premises in Jerez, finca El Altillo, will be open by this summer.

“It is a personal and professional challenge,” he said.

“But it was Santi’s dream to tackle social inequality and he always wanted to create a school.”

Universo Santi would include a free training centre for future employees of the eatery. 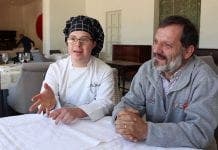