A RESCUE dog saved from the Hurricane Katrina aftermath is sniffing around Spain as part of a round-the-world trip with his owner. 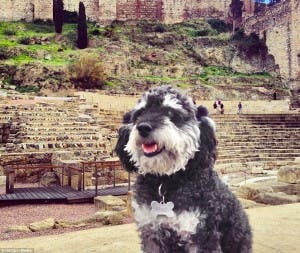 Willie, a six-year-old schnauzer-poodle has been photographed enjoying the mountains of the Sierra Nevada and Malaga’s Roman ruins with web consultant owner Justin Bhagat, 43.

Canadian Bhagat saved Willie from starving on the streets of New Orleans as a puppy and the intrepid pair have visited 12 countries so far since including Gibraltar, Morocco, France and Italy.

IN PICS: Are these the best six beaches in Spain?