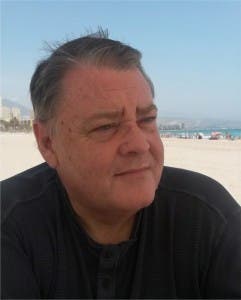 AN expat author has been applauded for his latest novel.

Brit Eric Gates received Goodreads Book of the Month award in February for his thriller Outsourced.

‘Extremely proud’ to receive the award, Gates – originally from Cheshire – thanks Goodreads users for his success.

“I am so grateful for the many emails I’ve received asking for continuations of my novel,” Gates, who now lives in Alicante, told the Olive Press. “It’s a wonderful feeling to have presented characters to people I have never met, all around the world, and have them respond so positively.

“I must be doing something right.”

The novel follows a New York writer of thriller novels who is plagued by a fan who turns out to be a hitman. Death and destruction quickly follows in a nail-biting storyline.