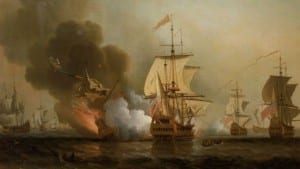 A SUNKEN Spanish galleon containing a €15.4 billion hoard of treasure has sparked a tug-of-war between Spain and Colombia.

The San Jose was returning to King Philip V of Spain when it was sunk by British pirates off the Colombian coast in 1709.

It was carrying treasure chests loaded with diamonds, emeralds and Spanish ‘pieces of eight’ coins – booty which could be worth billions to the Spanish economy.

Spanish Foreign Minister Jose Manuel García-Margallo and Colombian counterpart Ángela Holguín are meeting for discussions regarding the future of the find.

Garcia-Margallo has admitted that the two countries have their differences, particularly as Colombia isn’t a signatory to any international conventions on discovered treasure.

Spain named as one of the best countries in Europe to be a female health care worker – despite...