THE palatial home where the Duchess of Alba spent her final years has reopened as a museum, offering a fascinating insight into the private life of the charismatic royal. 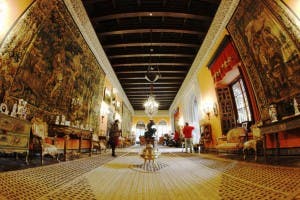 The 15th century Palacio de las Duenas in Sevilla was opened by her son, Carlos Fitz-James Stuart, 19th Duke of Alba, after the house was deemed of cultural interest.

“Our objective was not to intervene with the decor or layout,” project manager Ricardo Gasco said. “We wanted to keep the essential condition of the building, to preserve the way it was lived in.

“The Duke of Alba has been heavily involved in the project and was always eager to open the palace up to the public.”

He added: “This is an important building and a great insight in the Duchess of Alba’s final years.”

As well as being the Duchess’s main residence until her death in 2014, the palace was also the birthplace of 19th century poet Antonio Machado, and played host to the likes of Grace Kelly, Jacqueline Kennedy and Italian inventor Guglielmo Marconi.

The 1,900 m2 grounds showcase some 600 sculptures as well as courtyards, lemon groves and numerous pieces of art and tapestry.

John Culatto - 28 Jan, 2023 @ 08:45
PEOPLE all across Gibraltar remembered the horrors of the Holocaust on Friday by lighting a candle at 5pm alongside the rest of the world. The...