A HUMAN rights organisation has called for the immediate closure of the migrant detention centres in Tarifa and Algeciras after numerous ‘incidents’ over the last 30 days.

The Andalucian Pro Human Rights Association (APDHA) has described the centres, in Algeciras and Tarifa’s Isla de las Palomas, as ‘places representing the most flagrant infringement of human rights’.

APDHA confirmed an ombudsman ruling on February 5 to not admit women to the Algeciras branch due to poor construction conditions has been ‘completely ignored’.

The organisation also wants to investigate fire precautions in the Algeciras centre, where money was pledged on March 4, but no formal inspection appears to have been recorded. 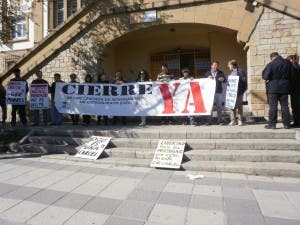 “All doors in the Algeciras centre are closed by lock and key which is a huge fire hazard,” Campo de Gibraltar volunteer Andres de la Pena told the Olive Press.

“People that have committed no crime are being housed in a deplorable state and awful conditions where they are ultimately expelled after a maximum of 60 days.”

“We have been denouncing these centres for many years but we get completely ignored.”