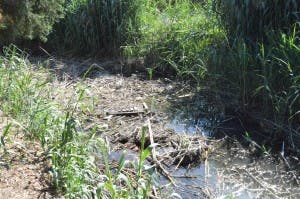 DANGEROUS rivers in Estepona will finally be cleaned up.

Aiming to be more ‘environmentally friendly’, Estepona Town Hall has pledged to eliminate waste water from beaches and rivers.

It comes after the Olive Press revealed that two rivers in the town were an environmental threat.

Following an Olive Press investigation, a strand of the killer E-Coli bacteria was detected in the Arroyo del Hornacinos, a stream often played in by children, last May.

The Town Hall faced yet another probe into a dangerous river, when levels of methane had been detected in the Arroyo Judio, in El Padro.

An EU investigation last summer found that waste being pumped into the river caused it to be a fire risk as as well as a typhoid health hazard.

Despite a subsequent Guardia Civil investigation, both rivers are yet to be treated.

However, the town hall has now announced a project to remove all waste water and improve on the current sewage system.

Sit back and enjoy the sunshine with a property in Spain