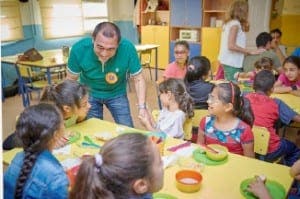 KELLOGGS and Cooperacion Internacional are planning to roll out their free school breakfast project across Andalucia.

Their Sevilla project which began in January at the Valeriano Becquer primary school sees 120 children fed breakfast every morning.

The three to 11-year-olds are served breakfast at 8.15am, with menus including milk, yoghurt, toast and olive oil, toast with tomatoes and cake on Fridays.

Cooperacion Internacional’s Andalucian delegate Pedro Ortega Campos told the Olive Press: “The idea is to help them have a good breakfast and get them into school and studying from the morning onwards.

“We are really happy with results of the project and we are now looking at other schools in Seville and Andalucia.”

As well as other criteria, the project selects schools by assessing the rate of social exclusion and unemployment among its students and families.

Kelloggs began its Breakfast for Better Days project in the UK in 1998, before expanding it to Asia, the US and Europe, where this year it plans donate 200 million servings of cereals and snacks.