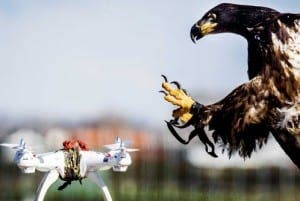 THE Spanish monarchs have found a high-flying way to get around pesky drones.

Eagles specially trained to take them out are set to swoop around Madrid’s Zarzuela Palace after unwanted attention from the flying objects last July.

King Felipe VI and his family got the idea from the Dutch police who were the first to train a fleet of drone-catching eagles.

Now Spanish bird trainer Jesus Gomez and his eagles are being commissioned by the royal family to protect their privacy.

The identity of the person who sent last summer’s drones was never discovered.