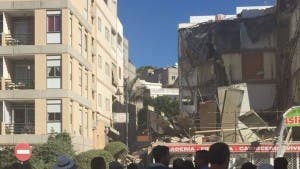 ONE elderly woman has died and several people may be trapped after a building collapse in Los Cristianos, Tenerife, which has already injured three.

The four-storey building came down at around 9:30am local time, and as many as nine people may now be trapped, according to a local government source.

Three were injured, a man and two women, one of whom is seriously hurt.

It is not known why the building in the town’s centre collapsed or how many people were inside it at the time.

Police evacuated nearby properties in case of a gas leak while firefighters are working to clear the rubble.

A witness reported a loud bang before the building collapsed.

Work that was reportedly being carried out to reopen a business in the building stopped two weeks ago after serious cracks were discovered.