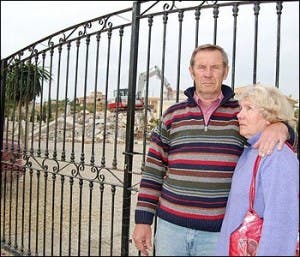 AN expat couple who have spent almost a decade fighting a Spanish property nightmare are set to be reimbursed for their huge financial losses.

Len and Helen Prior saw their Almeria home bulldozed in January 2008 over ‘planning irregularities’ despite having the correct paperwork signed off by the town hall.

After fighting for compensation for more than eight years, the Berkshire couple is now set to receive €425,185.43, plus interest, in compensation from Vera Town Hall thanks to an Almeria court ruling.

But campaign group AUAN fears it is a ‘hollow victory’ as the judgement can be appealed and future legal action by the town hall is also possible.

“The Priors did nothing wrong except to trust the Spanish state and its legal system and whilst fortunately things have changed in the last year, those changes come too late for Helen and Len Prior.”

She added: “We ask that the Priors be compensated once and for all.

“It is not acceptable that they must continue to live in their garage suffering continuous moral damage.

“The house of their dreams was demolished before their eyes, they had to empty it of furniture in a few hours and Mr Prior collapsed due to the stress of the demolition.”