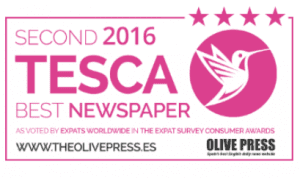 The accolade follows a poll of tens of thousands of expats from more than 90 different countries.

“It’s brilliant news, it’s great to have the recognition after working so hard,” Publisher and Editor of the Olive Press Jon Clarke said, “It’s pretty amazing considering how young the paper is as we will be celebrating just our tenth anniversary this year. The whole team deserves a pat on the back.”

The Olive Press came second to France’s Connexion, while third went to Round Town News, which has been operating on Spain’s Costa Blanca for more than 30 years.

The Olive Press, which began printing in 2006, is best known for its investigative work in the Andalucia region of southern Spain, and last September set up an additional paper to cover the British territory of Gibraltar.

Publishing consultant for the paper Clive Jacques said: “This is a brilliant good news story for us. At times the paper is accused of mainly highlighting bad news, but it is good for the readers and advertisers to know the Olive Press is officially the second most popular in the world, and the number one expat paper in Spain. ”

The awards are described as an opportunity for expatriates to nominate and commend the work of media owners and service providers that ‘add value to their lives’.

The award for best blog went to expat.com, best newsletter to The Telegraph, best magazine to the Economist, best radio station to Talksport and best news website to Angloinfo.com.