FOLLOWING an incident last Thursday April 28 when two Brits were booted off a flight to Spain for drunken behaviour, British holidaymakers have make their thoughts public.

A total of 79% surveyed revealed they would support new measures to limit drinking on planes.

More than one in ten wanted a ‘total ban on booze’ on aeroplanes to prevent disruption for holidaymakers and travellers. 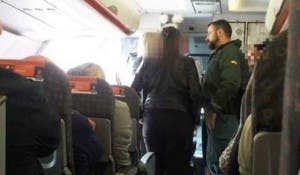 The survey, by Opodo travel agent, revealed that 40% of the 1,375 Brits questioned would like to see a two-drink limit for airborne travellers.

Just last week there were several incidents involving intoxicated passengers after two ‘abusive and disruptive’ women were escorted off a Belfast-Barcelona fight and a man allegedly locked himself in an EasyJet toilet causing the Bristol–Malaga flight to return home.

Interestingly, a far higher proportion of Spaniards and Italians favour a total ban on alcohol in the air, standing at 31% and 35% respectively.

While Germans sided with the UK at just 11% and 35% there should be no restrictions.