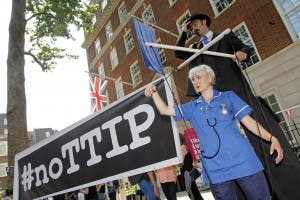 HUNDREDS of documents leaked by Greenpeace could spell the end for the controversial Transatlantic Trade and Investment Partnership deal between the US and EU.

The 248-page leak reveal how US corporations could hold sway over EU protections on consumers and the environment.

Greenpeace say the documents reveal how the US wants to replace the EU’s ‘precautionary principle’ on potentially harmful products with the more relaxed US standard, which seeks to manage risks rather than avoid them altogether.

The principle can currently demand manufacturers to prove a product bears no danger to consumers or the environment.

It applies to products such as genetically modified organisms (GMO’s), which are widely used in the US but whose risks to the ecosystem and food chain remain a source of fierce debate in the EU.

Under the agreement, the EU would have to notify the US and its corporations based in the EU of any changes to similar regulations.

US companies would consequently have the same input and sway over EU regulations as their European counterparts.

But the European Commission says the documents reflect negotiating positions, not any final outcome, while EU’s chief negotiator described some of Greenpeace’s arguements as “flatly wrong”.

Supporters of the deal say it will bring more than $100 billion of economic gains to both the US and the EU, but campaigners argue it will hand too much power to businesses at the expense of national governments and consumers.

They also point out how the leaked texts fail to mention the global committment to reduce CO2 emissions, which were agreed at last year’s Paris Summit on global warming.

This is despite promises from the European Commission that it would make environmental sustainability a key component of any trade deal.

Campaigners now say the talks, which have been held almost entirely in secret, are on the rocks following the leak.

“The TTIP negotiations will never survive this leak,” War on Want’s executive director John Hillary said, “The only way that the European Commission has managed to keep the negotiations going so far is through complete secrecy as to the actual details of the deal under negotiation.

Now we can see the details for ourselves, and they are truly shocking. This is surely the beginning of the end for this much hated deal.”