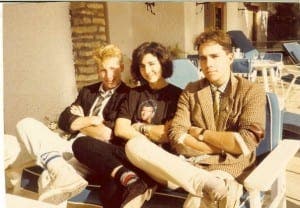 My formative fashion years were spent in a decade that saw rolled-up jackets worn over T-shirts and shoulder pads that you could land a small Lear Jet on.

Ever since that decade, I’ve struggled manfully through the world of fashion so I thought that I’d share some of my more, ermmm, ‘interesting’ fashion faux pas over the years with you.

I grew up in the 70s, which meant that most of the early childhood photos have me sporting a rather fetching lumberjack jacket, Starsky and Hutch T shirt and  flared jeans combo, with my hair worn shoulder length. It’s a look that I came back to recently, but without the hair (of which more later).

My teenage years in the Midlands saw me into my Goth-Heavy Rock phase.

The Cult, The Cure and Killing Joke were all big influences and I spent the ages of 13 to 17 happily moping about the drizzle-filled Staffordshire countryside in a succession of long trenchcoats, black waistcoats, baggy black trousers, heavy felt boots and Victorian brooches, and as miserable as a wet weekend (listening to non-stop Cure albums will do that to an impressionable teen, trust me).

And then something terrible happened. We moved from the Potteries to Puerto Banus. My first meeting with new friends was a culture shock that took months to recover from.

Most of them wore surf shirts and ripped jeans, all had tans and looked healthy.

My Goth gear made me stick out like a Zombie in a Zumba class, a fact that was confirmed when I went to my first BBQ, over in Estepona.

Sixty minutes later the other passengers had become so concerned at the weirdo slumped over the back seats sweating profusely that they begged the driver to pull over so they could open a window – this was in pre-air conditioning days.

I poured myself gasping into the street, my hair plastered to my face, and that was the end of my Goth phase.

The rest of the 80s was spent in regulation Marbella style T-shirt and ripped jeans although I still maintained the gelled hair.

The build-up to a big night out included applying industrial quantities of hairspray to get it just right.

I’m sure that I was single-handedly responsible for the hole in the ozone level above Banus.

Then I’d leap on my Mobylette and, in those pre-helmet day, tear down to the Port.

Obviously, when I arrived,  my hair looked like I had been blasted through a wind tunnel so it was off to the bathrooms to go through the whole process again.

My look, ahem, ‘mellowed’ during my last two years at college.

I was playing guitar in a band, studying art and English and was heavily into The Doors and Hendrix.

I wore collarless shirts, grew my hair long and added a Shakespearean beard.

Visiting parents thought I was the drama teacher…

A return to London saw me pitch head first into plaid shirts and the whole grunge scene, with my hair now shoulder length a la Kurt Cobain, until the terrible day that I caught the reflection of the back of my head in the mirror and saw the beginnings of a bald patch.

Without hesitation, the next day I walked into the nearest hair salon and asked the stylist to chop the lot off.

I can still remember her shrieks of glee as she hacked away and the comment that the place was so full of long hair afterwards, it looked as if someone had shot Russell Brand with a Bazooka.

My hair has stayed cropped ever since, and I’ve lived by the mantra of ‘God made just a few perfect heads. On the rest He put hair’.

In the meantime I’ve given up trying to wear street style (there’s nothing worse than a middle-aged bloke in skateboard  gear and baggy jeans) and am trying out a look that I like to think is Mellow Mediterranean Mod.

And, due to the fact that I wasn’t born innately stylish (In my next life I want to come back as an Italian, please), whenever I’m faced with a fashion decision, I find myself asking the following question:

‘Would David Niven have worn this?’