WORLD Press Freedom Day took a sombre tone after it was revealed in April that press freedom is at its worst for over a decade. 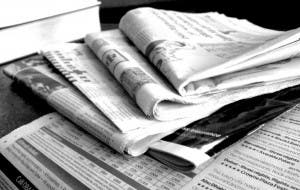 A report by Freedom House found that around 46% of the world’s population lives in areas without press freedom, while 41% enjoys only a partly-free press.

The global average score of 48.9 is the lowest score since 2003, while Europe saw the largest decline.

Freedom House project director Sarah Repucci said: “What we have seen across Europe has been the use of security and surveillance laws to limit the space for free expression, it’s a new trend in Europe to use the security laws against the media.”

Spain’s controversial new ‘gag law’ has already seen a journalist arrested and fined for tweeting photos of the police.

In the UK, freedom of information legislation is under threat as the government is reviewing whether the ‘right to know’ is leaving sensitive information unprotected, and whether the cost of providing information is placing a burden on public authorities.

The industry and campaign groups used the day to discuss and raise awareness about the troubles facing journalists worldwide.

“It’s important to take a day to remember those journalists who paid with their lives, who paid their bodies or are behind bars,” Radsch added.

Human Rights Watch marked the day yesterday by releasing a report on the dangers in Somalia, where journalists often receive threats and where many are killed.

France was the second deadliest country in the world for journalists last year with nine being killed by Islamic terrorists. Syria was the most, with 14 killed.

UNESCO’s Director General Irina Bokova opened the World Press Freedom Day conference in Finland by calling the killing of hundreds of journalists, “intolerable and unacceptable”, before calling on countries to prosecute those who threaten and attack the media.

More than 1,200 people attended the Helsinki conference, which highlighted the increasing lack of safety for journalists reporting on wars, corruption, environmental damage, and even soccer.

Finland’s president Sauli Niinisto, who spoke at the conference, said: “We want to see all journalists, both online and offline, work without the risk of being persecuted and without fearing for their and their families’ safety.”