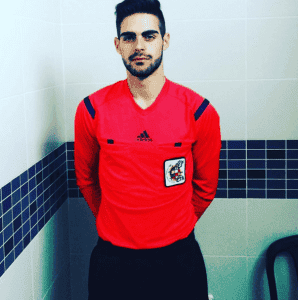 Jesús Tomillero has made the decision just 14 months after coming out.

The final straw followed his decision to give a penalty during a match between Portuense and San Fernando Isleño last weekend.

A visiting supporter shouted at him: “That’s that poof who was on the telly,” adding, “you can stick the goal up your arse, you f**king poof”.

The referee said the worst thing was that “everyone in the crowd laughed”.

He resigned from the Andalucían football federation soon after.

Tomillero came out publicly last March after he presented a formal complaint against a kit man from Peña Madridista Linense in the Andalucia´s under-19 league.

The man was only given a nine-game ban and a €30 fine, despite screaming:  “You’re a c***sucker and you take it in the a**, you faggot. I’ll wait for you outside,” in front of teenagers.

Local political parties in La Línea have shown support for Tomillero, and he says he has been backed by first division referees, but he remains disappointed that officials from the Andalucían federation ignored him after he decided to come out publicly last March.

He has presented a formal complaint about Saturday’s events, and hopes there will be meaningful repercussions this time.