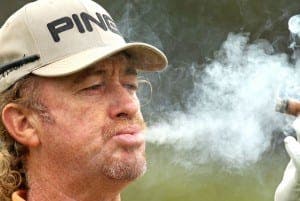 BRAZIL’S greenkeepers will not be sweeping cigar ash from the country’s golf courses this summer.

Flamboyant Spanish golfer Miguel Angel Jimenez – renowned for puffing on a big fat Havana during play – has ruled himself out of contention for the Rio Olympics which get underway in less than 100 days.

Jimenez had previously expressed a desire to represent Spain, with golf returning to the Olympic arena for the first time since 1904.

However, the 52-year-old has now ruled himself out, opting to concentrate on the PGA Tour instead.

“It is a shame but I need to concentrate on other tournaments first,” Jimenez said. “I am sure Spain will do well at the Olympics, we have so many top golfers.”

Jimenez is the latest in an ever-lengthening line of pro golfers boycotting the games in order to concentrate on other tournaments.

As well as the Olympics dates for the PGA Tour, LPGA Tour, the Champions Senior Tour and the European PGA Tour are all scheduled for this summer.

Adam Scott, Louis Oosthuizen, Charl Schwartzel and Vijay Singh have also decided to sit out the tournament in Rio.

Big cocaine shipments intercepted at port of Valencia in Spain