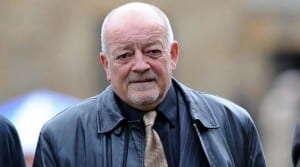 STAR of hit TV show Benidorm Tim Healy is recovering in a UK hospital after ´fighting for his life´ in Spain.

The 64-year-old had been in hopsital for almost a month after falling ill with a mystery illness while filming for the show.

His condition had stabilised sufficiently on Saturday for him to be flown back to a Manchester hospital.

The geordie actors´ ex-wife Denise Welch, a Loose Women host, is said to have visited him while he was in Spain.

A source said: “Tim has been in a bad way for a while and had to pull out of filming Benidorm. He was in hospital for three and a half weeks, and at one point he was fighting for his life.

“But he was flown to Man­­chester on Saturday and his condition has improved. His wife Joan has been by his side throughout the ordeal.

“He’s still in hospital but is making progress. The doctors are keeping a constant eye on him.”

Tim has played cross-dressing Lesley in the hit show for the past six years.

The current series being filmed is halfway through production.

An ITV spokesperson said: “Filming schedules have been adjusted to accommodate Tim’s absence on screen.

“Everyone on Benidorm, both cast and crew, just wants him to rest up and recover well in his own time.”