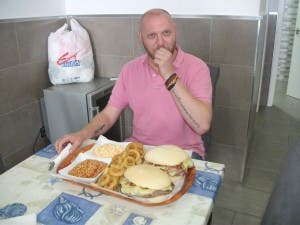 IF menu del dias leave your stomach growling, a sandwich doesn’t quite hit the spot and grilled sardines fail to satisfy your hunger, then head up into Malaga’s mountains for a proper feast.

Inspired by American TV show Man vs Food, expat run eatery Sylvia’s is laying on a spread to rival all others.

The monster challenge includes two 32 oz burgers topped with 12 slices of bacon and 12 slices of cheese, a side order of 750 grams of chips, 12 onion rings, a tin of beans and a pot of coleslaw. And to wash all that down; a litre of milkshake.

Anyone who completes the challenge gets the meal for free as well as a t-shirt and a picture of themselves on the restaurant’s ‘Wall of Fame’.

However, fail – as five from five have thus far – and your face is plastered on the ‘Wall of Shame’.

“A few of us were chatting about the American show Man vs Food and we thought why not give it a go,” British owner Andrea told the Olive Press. “A couple of guys claimed they could do it but so far no-one has got close.”

She added: “ Suzie our cook gets a lot of compliments about her homemade burgers so we thought we’d step it up a notch and do the challenge with two mega burgers.”

With contestants already lined up for the week ahead, Andrea is looking forward to the first success story.

On the back of the Man vs Food challenge, Sylvia’s is preparing to launch a Meat Feast and Hot Wing Challenge in time to celebrate its one year anniversary on July 4.