And it is hardly surprising, as she launches into yet another weekend of hen party fun and games, which involves the management of somewhere in the region of 5000 people.

“It’s a massive task organising so many hen and stag-do’s,” adds the star of reality TV shows Life on Marbs and soon-to-screen Playa in Marbella, with Elliott Wright. “We’re taking care of 40,000 people on such events this summer alone.

“It’s crazy and involves working silly hours, but I love it.”

While the bar, founded by Paul Bowcock and Wayne Lineker, is still popular with partygoers of all ages, the bar has managed to brand itself as THE must visit for hens and stag do’s.

It was just over a decade ago since Lina came up with the idea to focus on the then-neglected hen party sector.

“I saw a massive gap in the market, after coming here 14 years ago with a hen party and there was nowhere to go.”

So she put together a package for the Linekers group – which is still in use to this day – and they have never looked back. “We even grew through the recession and we have already sold out for the summer months. This will be our biggest summer yet and, these days, we get groups booking a year in advance,” explains Lina, 55, who lives in Marbella.

The monopoly on hen do’s is impressive but it’s not surprising given the service. 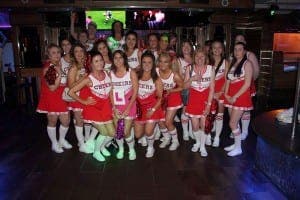 Meeted and greeted at the door with bubbly, the groups are waited on hand and foot by a dedicated waiter in their own roped off VIP área, complete with personalised plasma TV’s which the hen-doers can upload photos to.

On the heart of Hurricane Alley, as it is sometimes known, you can really feel the buzz of the place as you approach nearing midnight.

The place is on fire and hordes of hen nights and revellers are dancing like there is no tomorrow, with the resident DJ banging out everything from 90’s club classics to the latest house tunes.

Within five minutes of getting in I am taken in under the wing of a hen do from Belfast.

The bride-to-be, Courtney Speers, waxed lyrical about her choice of venue, as did her friends.

“I can’t say I’m original. A friend of mine came here for hers and said it was amazing, we’ve had such a good night and you get so well looked after here!”

A few shots later and we were adding each other on Facebook and making plans to meet up at the weekend. 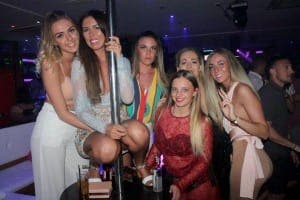 Cousins, mother of the groom and friends were all out in forcé to celebrate the 23-year-old’s last night of freedom.

It wasn’t long before I regretted my outfit choice – dancing your heart out to ‘I’m a dreamer’ in a blazer and shirt will only leave you looking like you have just stepped out of a sauna.

Just as I was to have a dancing break the pole dancing competition kicked off – the break would have to wait.

While the Belfast girls did their best to impress the DJ-cum-pole-dancing judge, it was another hen night group from Wales who took home the bubbly.

The sign of a good night is how sad you are when it’s over, and very sad I was.

Puerto Banus can get a bad rep from time to time, but it seems to me Linekers will always be a safe bet if you want a fun and crazy night out with your mates – and who doesn’t want that?