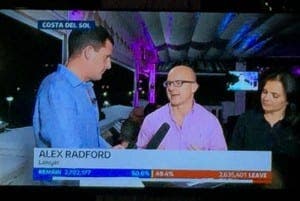 THEY came, they spoke, but the many of the expats who watched the EU referendum results in Kinsale Bar, Duquesa, on the night of June 23 left disappointed with the results.

In a special all-night broadcast, a number of expats from along the Costa del Sol and Gibraltar were interviewed by an ITV news crew and correspondent Geraint Vincent.

In an evening which started with a confident Remain campaign backed heavily by the bookies, the outcome was 51.9% for Leave with almost 17.5 million Leave voters versus Remain’s 16.1 million.

For expats it throws into question access to free healthcare, pensions, the need for visas and the affordability into travel, among many other areas.

“Let’s not forget that we are immigrants ourselves,” said Tamara Essex.

“I am devastated by the results and still cannot believe this has happened and keep on feeling it is as though I am having a long nightmare,” she said, following the results.

“I have been incredibly worried about this vote and a Leave would mean enormous change,” said Alex Radford of My Lawyer in Spain, who left prior to the final count.

“I, too, cannot believe this is happening and truly think it is a massive shame for the British people.”