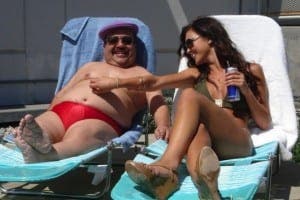 It’s coming up to 10pm on a Monday evening in early June and I’m writing naked.

No, it’s not that the Editor of the Olive Press has sent me on an undercover report on the skullduggery in nudist camps (I’ve been begging to go on that assignment for years, but he always refuses).

The reason for my current state of undress is the weather.

Summer has arrived early in Andalucia and the temperatures are soaring.

Social Media is ablaze with posts about the heat, with photos of car dashboard temperature gauges reading 40C and upwards.

Of course, people with a warped or infantile sense of humour like myself take great pleasure reading posts such as ‘It was so hot in my bedroom that my boyfriend had to take a swim to cool down’.

Others posted that the hot weather was akin to walking into a hair dryer.

Alas with my lack of hair, hair dryers are a dim and distant memory and I have to take great care not get my bald pate burnt.

While living in London, I was sent over to cover the European Grand Prix in Jerez.

Bits of my head that had been covered in hair when I first lived in Spain were now bald, and unused to the fierce Andalucian sun.

I badly burnt my temples on both sides, which was bad enough, but on my return to London the sunburn scabbed over, making it look as if I’d had a pair of devilish horns removed…

If you always thought that complaining about the weather was a British trait, however, you’d be wrong.

The Spanish complain about it as well. In the summer months you will be greeted with sighs of ‘Que calor’, while winter brings equally soulfelt sighs of ‘Que frio’.

One of the many things that I love about Spain is there are now half measures with the weather. I’m from Stoke, where we have 11 months of miserable drizzle and a two-week hosepipe ban in what passes for summer.

In Spain the weather is more dramatic – pelting with rain, knee deep in snow up on the sierras or scorchingly hot in summer.

Plus the hot weather resulted in one of Spain’s greatest contributions to world culture – the siesta!

Enjoy the summer and take my advice and stay by the pool or the beer fridge. I’m off now to go and stick my head in my lake!