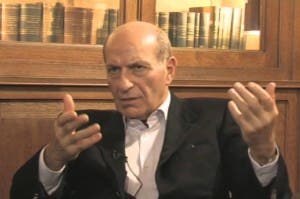 “WE will all be living with, what I would call, ‘Cameron’s mistake’, monumental mistake,” Professor Ezra Suleiman said, one of America’s, indeed the world’s, leading Contemporary European politics scholars.

Professor Suleiman has published 10 books about French and European politics. He has won numerous world-renowned fellowships. His contribution to academia earned him a place in the Legion of Honour.

And despite Nigel Farage’s claims that Brits are ‘fed up’ with expert analysis, people like Suleiman cannot be ignored, nor dismissed.

Suleiman sees the vote to leave as a symptom of the populism spreading throughout Europe and the United States. This mentality, he believes, poses a major threat to Europe, akin to the crisis of the 1930s that saw the rise of Hitler, Mussolini and Franco, though not so dire, since, he said, ‘hopefully we’ve learned some lessons’.

“Nationalism is a very strong force. It has governed most of interstate relations and countries for the last two centuries. [The] arguments logic, calculation of economic benefits, losses, etc., become less important than the idea ‘we will have our nation,'” Suleiman told the Olive Press.

The Remain campaign, though certainly guilty of exaggeration, relied on the former argument, and the Leave campaign exploited the latter.

“Johnson, who’s a complete opportunist, was not really against [the EU]. We know he was very much for the European Union before, but for pure opportunism, he switched at the last few weeks,” he added.

This nationalism, though, is not exclusive to the Leave campaign. Suleiman sees the same strain of nationalism now in Scotland, the leaders of which have said there will be another independence referendum so they can stay in the EU.

Scotland may find difficulty remaining an EU member, though. Suleiman believes that Scotland will argue that they are already and EU member. If they declare independence from the UK before the future prime minister invokes Article 50, they will not need to apply for membership, they would already be members.

“Whether the EU will buy that argument or say no you now have become a separate country and you need to apply, I’m not sure. It gets into fairly tricky stuff,” he said.

Scottish admission as a new state would come easily, perhaps not at all, especially if the Spanish PP government remains in power. Rajoy, Spain’s caretaker prime minister, promised that Spain would block Scottish EU membership during the latter’s first referendum in 2013 due to parallel’s between Scotland and Catalunya.

All this assumes, though, that the EU will maintain its current form throughout this populist uproar.

Though he remains optimistic that the EU will not dissolve, Suleiman thinks they will undertake necessary changes. He envisions a tiered EU, with a ‘hard core of Europeans all in it together’ and other states, like Britain, who will ‘opt into this… opt out of that.’

Whether or not the EU can hold together, in this form or any, remains to be seen, but Suleiman understands this moment in history as critical for all of Europe.

“You can call it nationalism, populism, whatever it is, it’s anti-establishment, anti-elite,” he said. “Look at a country like France, why is Marine Le Pen going up and up? Because people don’t feel that they’re getting their share of this democracy. It’s working to the advantage of a few, not just the rich people. It’s the politicians taking care of themselves, not being concerned about people… These are signs of something important going on.”