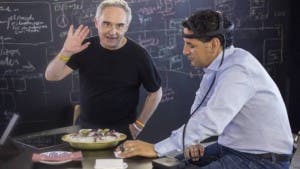 IN a unique experiment, operatic singing legend Juan Diego Florez had his brain scanned as he was fed food created by culinary masterchef Ferran Adria.

The scientific endeavour took place in the BulliLab of Barcelona, ??where Adrià has his headquarters.

The experiment saw the pair adorn specialist headgear that can measure the brain’s neurological reactions to emotions felt.

Florez was told to close his eyes and relax as the mechanisms surrounding his head scanned his brain’s responses and a polygraph measured his galvanic skin reaction.

He was fed the ‘miniairbag’ ham bull, Neguiri with lime sauce, razor clams with Umeboshi sauce, pink grapefruit with ginger and oysters with gazpacho sauce and kumquat.

Ferran was wired up while listening to Juan play emotive songs like the Italian classic O Sole Mio.

“It’s as special as when Miguel Barcelo began painting at elBulli or when Robert De Niro came,” he said.

“We are fortunate to live such incredible experiences.”

The experiment was conducted by Telefonica, the telecommunications giant the pair are both ambassadors for.

Elena Gocmen Rueda - 24 Jan, 2022 @ 12:45
POLICE clashed with dozens of young people who gathered in the streets to celebrate the end of a restrictive curfew in Spain’s northeastern region...