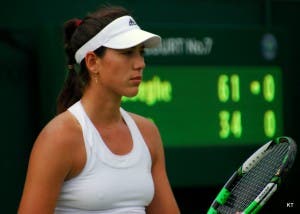 FIRST the Euros, now Wimbledon. The Spanish sporting community has another elimination to mourn.

This year all of the Spanish men were eliminated before the fourth round of the most prestigious tennis tournament in the world.

The absence of the great Rafael Nadal due to a wrist injury did not help Spain’s chances on the grass courts.

In one of the biggest Wimbledon upsets, Spanish favorite Garbine Muguruza, ranked no. 2 in the world, lost in the second round to Slovakian Jana Cepelova, ranked no. 124.

Muguruza was set to be major competition for Serena Williams who she defeated in the 2016 French Open.

Spain’s only hope to stay alive in the tournament was Carla Suarez who reached her career high ranking of no. 6 in the world earlier this year.

Suarez started the match well and seemed to be dominating (3-0) but after losing some ground, American Venus Williams got into a rhythm that could not be broken, and after an exhausting 96 minutes, Williams beat Suarez in the fourth round (7-6, 6-4).