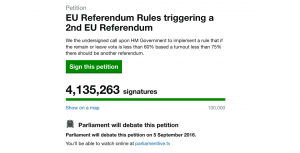 A RECORD-BREAKING petition has forced the House of Commons to debate proposed referendum rule changes.

The House will hold the debate on September 5.

A House of Commons spokesperson insisted that ‘in scheduling this debate, [the House is] not supporting the call for a second referendum.’

“The debate will allow MPs to put forward a range of views on behalf of their constituents. At the end of the debate, a Government Minister will respond to the points raised,” the spokesperson said.

A Leave supporter, William Oliver Healy, created the petition on May 25, nearly a month before the referendum.

He has since disowned the petition.