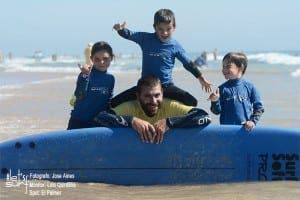 “NOW pull like crazy,” shouted Miguelito, as a metre-high wave bore down on me at a rate of knots.

Head down, eyes fixed ahead, I did what I was told and paddled my arms through the water like Michael Phelps on Red Bull… and ‘aloha’ in a split second I was standing up and riding the wave into the shore.

I’ll confess, it wasn’t my first day surfing and – being honest – my 11-year-old daughter probably catches more waves than me, but with Miguelito I was definitely getting somewhere.

We had started the day at 10am, doing yoga stretches and warming up, alongside an African trinket salesman, who was as bemused as me.

Lessons are based around the state of the tide and beginners are taken through the basics, if they haven’t surfed before, but are quickly down on the sand.

Everyone gets a wetsuit and a rash vest before being sent like a line waddling ducks in pairs, carrying two surfboards between them.

This is the only official surf school in Andalucia, working with Californian company O’Neill, and with three bases in Conil, Roche and El Palmar.

We are taking a couple of lessons at the latter, a beach that provides waves nearly all year round and has become one of the hippest places to hang out in summer, thanks to its bronzed surf dudes and obligatory hangers on.

There are literally dozens of surf schools plying their trade and there are as many bars and restaurants with dance music at night.

Teaching-wise you will be hard pressed to find anyone as good as Miguelito Argudo, a former professional, who has competed as far and wide as Indonesia, Thailand and Portugal.

A softly-spoken Jerezano he is excellent with kids and is genuinely nurturing towards them.

But, even with a klutz like me – perhaps 20 lessons down – he starts to make some progress.

While I finally cracked standing up on an intensive three-day break near Sintra, in Portugal, last year, he works on my style and ‘crouch’ and gives me some tips on how to spot the ideal wave.

“It takes time and is almost a spiritual thing. You’ve either got it or not,” he explains.

I may not have it (yet) but there are few things that give as much a buzz as riding a wave into shore, standing up or not.