THE fire which has been burning on the outskirts of La Linea for the past 24 hours was started intentionally.

The mayor of San Roque has confirmed that arson is to blame for the fire near to Alcaidesa and Santa Margarita beach.

Mayor Juan Carlos Ruiz Boix said that the fire in La Linea had four seats (starting points), while another fire was started in San Roque.

He said that it is ‘impossible’ for five fires to have been started so close to each other without it being arson.

It is believed that a bin in Santa Margarita was one of the starting points. 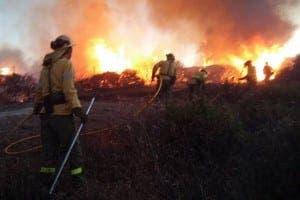 More than 500 people were forced to spend last night in nearby sports centres after residents and guests at the Hotel Aldiana were evacuated.

Another 120 children have been sent home from a summer camp in San Roque. 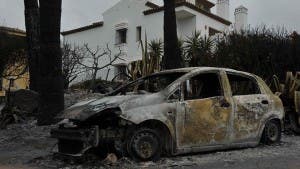 At least two cars have been burnt out and ‘light damage’ has been reported to nearby properties.

The fire is still officially ‘active’ however the flames are being to die down.

In total three aircraft, 60 fire fighter crews and a unit from the Guardia Civil’s Seprona agency spent the night tackling the blaze.

Roads leading out of La Linea were also closed off last night after the wind changed, putting properties at risk.