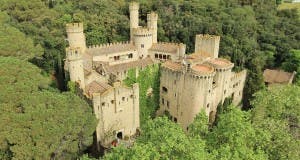 A GAME of Thrones tour of Spain has been priced at less than €275 by a leading voucher website.

It comes after an Olive Press feature last issue revealed the different filming locations used by the smash hit HBO series in Spain.

Voucherbox estimates someone could travel from London to see all the Spanish locations for just €269, with airfare, trains and buses included. The trip would likely cost someone already in Spain much less.

Other price estimates (all from London) include €192 for Croatian locations and €541 for Northern Irish locations.