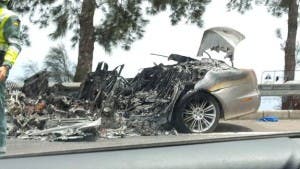 FIRE from a vehicle in the middle of the A-7 is causing traffic in Malaga.

According to reports from the Malaga Traffic Control Centre the incident occurred around 13.50 and is currently causing a three kilometre back up near to Rincón de la Victoria.

The driver reportedly escaped the burning vehicle and is not in danger but the flames have alarmed others on the road.

There are also reports of a second accident that occurred around 14.00 on the A-7 from Rincon de la Victoria through Cadiz.

A tourist and a truck collided at the 254 junction.