AT the end of my first year at university, after months of exams, I vowed to 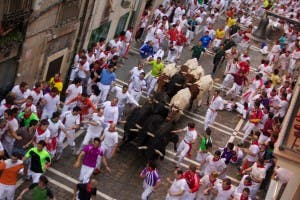 do nothing, absolutely nothing.

But after weeks of sleeping 12 hours a day and watching Netflix the other 12, I finally picked up a book, The Sun Also Rises, by legendary American writer Ernest Hemingway. I figured if I was going to be a loaf, I might at least be a learned loaf.

The book gave me the promise of adventure. Its protagonist Jake Barnes was a frivolous loaf too, but at least he got out of bed.

Set around Pamplona’s San Fermin festival, it opened a new world for me, painting a wonderful picture of Spain, its festivities and its peculiarities.

So, it was a genuine joy to discover that my two-month internship with the Olive Press from Princeton University, coincided with the famous feria, albeit from a completely different corner of Spain.

That said, even a 12-hour journey each way, didn’t put me off and I was rewarded with an intense 24-hour escapade at San Fermin.

THEIR white outfits and red hankies are the big giveaway but their voices are just as strong. The crowd at the the front of the morning train to Pamplona from Madrid have all been to San Fermin before and are on song to a man. Already drinking and getting into the swing, as we cross beneath the aqueduct into Pamplona station, they chant traditional festival songs in harmony, con gusto.

We arrive in Pamplona, and the train empties quickly as everyone races to cabs and buses.

No one pays much heed to the people slumped asleep on station benches, some with their heads flopped between their legs, enduring the heat and their hangovers and wishing Hemingway had been wrong; but the sun also rises (early) on Pamplona in summer …

I find my way through the side streets to Plaza de Castillo, the town’s main square.

Spent revellers still nap under trees while hardier souls order up drinks and carry on carousing.

At Cafe Iruna, a haunt of Hemingway’s, I sit next to two Americans and we all have a beer. Ron, 43, and his 18-year-old nephew Robbie who’s here for a treat before he starts college in the Autumn.

They wear the same relaxed smile. There’s something almost brotherly about the way they speak to each other, slouched in their chairs, as if 25 years and any father-son deference evaporated with the start of the festival. It turns out they have both read Hemingway’s The Sun Also Rises, which celebrates its 90th anniversary this year. Ron first read it when he was Robbie’s age – one of two reasons for bringing him to Pamplona. The other? Ron believes that San Fermin differs from other festivals. “You can go to any festival and see young people get drunk…,” he tells me. “Here, you still have tradition too.”

One of the festival’s few remaining ties to its religious origins is the procession of San Fermin.

On July 6, the opening day, the town carries an ornately-dressed effigy of the saint from church to church before returning it to its eponymous chapel at Iglesia de San Lorenzo. I’m three days late, long after the buzz of the procession had worn off, but the church is open and worth a visit.

The church is seemingly dark and empty, but then off to the side I spot a choir, dressed in white-and-red, gathered in front of San Fermin’s statue. On the strike of three from a conductor they spark up a litany of hymns dedicated to Pamplona, Navarra and San Fermin. The conductor’s name is Pedro Goni (pronounced GOH-nyee) and the 72-year-old tells me he has been singing in the choir for 20 years, and they are raising money for people with Parkinson’s Disease.

To the station to meet two friends off the 5pm train: Jeremy Kleiman, 20, and Zack Marks, 21, both from Florida. They check into their Airbnb apartment, then it’s off to buy cheap white trousers from a Chinese shop before we hit the city centre for tonight’s party.

We smoke cigars and drink some beers.

We go to a concert in the Plaza de Castillo, which is little to write home about.

The concert winds down, and we walk to the other side of town for fireworks, stopping at various bars en route, naturally.

They shoot the fireworks off much closer to the gallery in Pamplona than they do back in the States. The proximity makes for a damn good show.

We drink too much for too long, but so does everyone. It’s a bit of a blur, but we definitely check out Cafe Iruna at night. It’s buzzing and a lot of fun. The lights are bright, and even the walls seem to sweat.

We spend a lot of time squeezing through key bullrun street Calle Estafeta, one of Plaza de Castillo’s perimeter streets where revellers spill out from crowded bars to form a human barricade of boozers.

Zack and I take a break from the jammed mass of people and grab an ice cream.

We return to the jammed mass… for more beer. And more beer.

We leave Cafe Iruna and take a welcomed reprieve with a sit down drink in the Plaza de Castillo.

Jeremy and I kip in a park outside the city walls. Zack still has 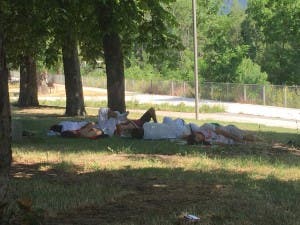 energy and his eyes on a few girls and goes off to re-enter the fray.  A couple of hours later, he returns to wake us, finding our wallets lying on the ground a few feet away – empty. I kept most of my cash in my shoe and only lose €10 but Jeremy has a hole in his trousers where his zipper pockets once were. Our practised pickpocket cut through them to get to his phone and wallet. No one takes it too badly, and we all get a laugh out of it. It’s hard not to, watching Jeremy walk back to Plaza del Toros with a giant rip in his trousers.

We get a bit lost but make it to the Plaza in time for the encierro.

A band and some traditional dancers are performing for a strangely subdued crowd. A girl two seats down from us struggles to remain upright. With a few minutes to go, they put a kiss cam up on the screen. It moves from couple to couple as the crowd roars. It reminds me of home (and not in a good way).

The bulls run, and it’s all over in a flash as animals, chased by men, disappear from view. It seems only one man got gored (not badly). But there was a scare in the Plaza as one bull straggled behind, causing havoc with runners still in the pit before the herders could get to him.

The vaquillas emerge, one-by-one: heifers with horns so twisted or blunt they can’t gore anyone. Runners dance around these misfits, taunting them, and slapping their rumps to rile them up. One guy flips over the back of one. Jeremy turns to me and says: ‘This is kind of f***ed up.’

We clean ourselves up before heading to the station to catch our train home.

We have breakfast/lunch/tea all rolled into one, drink lots of water and sit quietly, waiting for our train. We don’t have our heads between our legs, but they’re hurting. 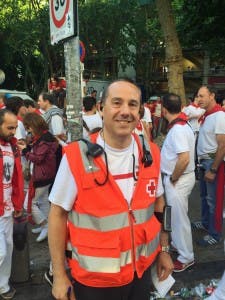 He spends his festival days staunching the blood of San Fermin’s victims. But medic Ignacio Sanchez’ eyes sparkle with passion as he talks about the bull run.

Despite all he has seen, he is still not disillusioned about the encierro.

A 50 year-old Pamplona native, he works as Red Cross Ambulance Coordinator for the duration of  the festival and this is his 25th year.

Even so, he prescribes explicit advice for runners, especially first-timers.

“When people start to run, not everyone knows when the bulls are coming. If you don’t feel comfortable waiting for the bulls, run to the plaza. You need to be confident about your fitness,” he says.

He himself is not ‘so courageous’. In fact, he admits, he got his job as an excuse not to run with his friends.

But he has been gored anyway. When I meet him he’s nursing a wounded right arm, received as he tried to pull a runner away from an angry bull.

“The ambulance worker’s position is also risky,” he says. “And this is not the first time I’ve had impact with the horn.”

Encierro – the running of the bulls

Corrida de toros – the bullfight, a bit of a misnomer since the literal translation would be ‘running of the bulls

Chupinazo – the firework fired from the town hall at noon on July 6, signalling the start of San Fermin

Pobre de mi –  sung at the festival’s closing ceremony, when everyone gathers in front of the town hall to chant this mournful ditty. It means ‘Poor Me’, and after just one day and night of San Fermin, it hits the nail right on the (sore) head