ALBERT RIVERA of the Ciudadanos party (C’s) made an unexpected move to try to unblock Spain since no party won overall control in the June general election. 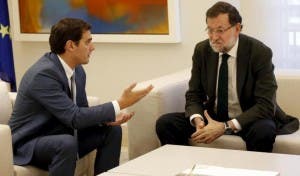 Leader of the PP Mariano Rajoy has been trying to get support from other MP’s to enable him to be sworn in as Prime Minister however failure to get the rival PSOE party to support or abstain has blocked any progress.

Rivera did not go as far as to claim long-term support for a PP government, saying that there is a lot more negotiation to do.

Even with the C’s votes, Rajoy would still not have enough to become MP.

Pressure has been mounting on Pedro Sanchez of the PSOE to abstain in a vote and allow Rajoy to form a government.