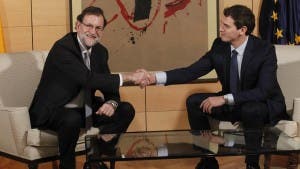 In return, the minority Ciudadanos will support the acting prime minister’s bid to form a government.

The Ciudadanos have asked that Rajoy immediately suspend all public officials being investigated for corruption, remove judicial privileges for elected officials, change the electoral law to increase proportional representation, end pardons in corruption cases, limit the terms of office of the Prime Minister, and set up a parliamentary commission to investigate alleged corruption in the so-called ‘Barcenas’ case involving illegal cash payments to PP officials.

Fernando Martinez-Maillo, the PP’s vice-secretary said: “Some measures are not sufficiently specific to be able to give a simple yes or no.”

If the PP is to begin talks on adding Ciudadanos’ 32 seats to its own 137, which would still leave it short of a simple majority, then Rajoy will have to announce a date for his investiture debate in Congress.

There his proposals to form a government would be put to vote.