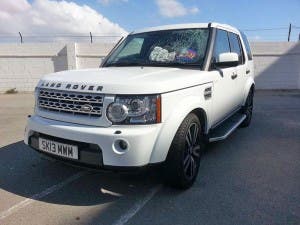 SPANISH authorities say they are closing in on a hit-and-run driver who killed a Scottish grandfather near Alicante on Sunday.

The white Land Rover Discovery has been identified as being registered to a UK company and is currently being forensically examined.

Fingerprints from inside the vehicle have already been gathered which authorities say will enable them to identify those who had been inside.

The car hit Robert Sneddon, 61, as he was walking along a main road in the Guardarmar del Segura in Costa Blanca, just after 10.30pm.

The local police are now working with Interpol and the British police in a bid to find anyone who may be connected to the incident.

Government delegate Juan Carlos Moragues, however, said the investigation has been hampered by the UK’s reluctance to join the European-wide automatic sharing of vehicle and driver information.

He feels this has ‘delayed’ progress in the case.