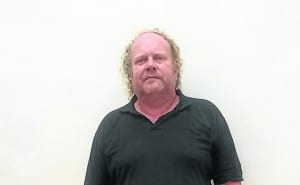 A GERMAN expat is trapped in a ‘nightmare’ after being caught up in a drug bust four years ago.

Karsten Kruger, 48, finished repairing a boat that was docked in Duquesa, just days before it was seized in Cadiz with 700kg of hash onboard.

Believing him to be behind the €6.2 million haul, authorities raided Karsten’s home on August 30 2012 and put him behind bars for 23 months.

But while he is now out – and has still not been charged – he cannot get his passport back.

“They have held my passport ever since, I cannot get a job, I cannot go anywhere, it’s a nightmare!” Karsten told the Olive Press.

“They released me just before I’d been inside for two years so they wouldn’t have to pay me for the time lost, which is the rule for being inside for 24 months without being charged.”

The courts ordered Karsten, originally from Bochum, near Dusseldorf, to pay a fine of €4.7 million euros or face trial.

“I obviously cannot pay that as I am not a drug lord,” said Karsten. “They have told me I will face a trial in Madrid but they keep moving forward the date.”

Karsten claims they have no evidence against him, adding that it’s clear from CCTV footage that he merely worked on restoring and painting the boat.

Karsten met the owner of the boat, an Irishman who has since been convicted in Spain of other offences, at a funeral of a friend.

He insisted the man, who is currently in prison, is behind the case and his only involvement was bringing the boat from Ireland to Spain and to repair it.

“There were no drugs on board when I brought it here, I had no idea how dangerous these people were,” he said.

“Oddly, two other people working on the boat were not arrested, but because I brought it from Ireland they think I am involved somehow.”

Karsten, who is originally trained as a hairdresser, served in the German navy before moving to Sabinillas in 1999, landing jobs in construction.

He has had job offers in Gibraltar but cannot go as he has still not been given his passport since being released two years ago.

“Even the Junta won’t help me or give me a job, they tell me that I don’t exist,” he said.
Friends have been supportive giving him odd jobs, but Karsten, who is single and has no family, says many have moved away and he feels as though he is running out of favours.

“I’m not sure I can do this for much longer,” he said, “I’m desperate. I owe rent, I’m living in an apartment smaller than me with just a bed and a cupboard, all I want to do is to be able to work.”

Friend of Karsten for 10 years Tulip Myra Wijsmuller, 55, told the Olive Press, “He’s such a nice guy, I truly trust him to look after my home when I go away, the whole thing is so unfair, it’s just a mess.”

EXCLUSIVE: German Madeleine McCann suspect to be accused of a string of rapes and two child offence charges THIS WEEK