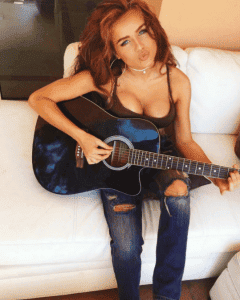 The Marbella belle is now heading to the US after being forced to leave the UK’s X Factor due to a car crash.

Rosie, 19, has secured an agent and is moving to California this Autumn.

Fans of the popular talent show went crazy for Rosie, 19, following her rendition of McTell’s Streets of London.

The singer – a topless model and body double for Emilia Clarke in Game of Thrones – led fans to rename the talent show ‘The Sex Factor’.

But the beauty – who was born in Cornwall but moved to Marbella when she was 11 – says she has high morals despite her sexualised persona online.

“I’ve got high morals,” she insists. “I really like the whole thing of keeping yourself for your husband.”

Tragically, her dreams of going further in the competition, after getting through the bootcamp stages, were dashed when she was involved in an accident, while in Spain, last year.

The moment when she pulls out is revealed on the show in September.