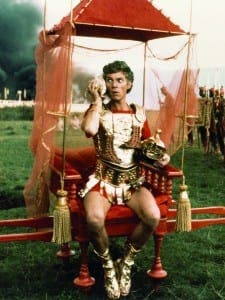 EVER since the Roman soothsayer Thrasyllus told Caligula he had no more chance of becoming Emperor than of riding a horse across the Gulf of Baiae, man has travelled to distant lands in search of sun, sea and sand.

Emperor Augustus may have given the hottest, most hassle-fraught month of the year its name but he’s not to blame for why you can’t get anything done in Spain in August.

It was the emperor who slept with his sisters, and made his horse a consul who started the trend that brings traffic chaos to our roads, bodies to our favourite beaches and a general meltdown in anything that might pass for ‘service’ in Spain.

Caligula had a bridge built across the gulf, rode across it in a splendid gold cloak and subsequently became Emperor, not only giving Thrasyllus the double finger and ruining the fortune-teller’s career but also establishing Baiae, in Italy, as the first known holiday resort.

Excavations reveal sulphur baths and elaborate villas with mosaic swimming pools (remind you of anywhere close by, beginning with M)?  There was even a casino.

What went on there, historians can only surmise but Seneca the Younger penned a moral epistle on Baiae and Vice, describing the spa town as a ‘vortex of luxury’ and a ‘harbour of vice’ not unlike a few ‘harbours’ we all know locally today…

There’s nothing ground-breaking about the Camino de Santiago, either. Hailed as ‘2016’s must-do’ by internet travel sages, it’s been trodden by pilgrims since the 9th century.

Gap years? Flashpacking? Old hat. It’s been ‘the thing’ for the offspring of well-off families to take off on an ‘educational’ Grand Tour of Europe since the 17th century. The itinerary crossed the English Channel to Paris (history of art lectures for young ladies, French kissing for young men), via the frescoes of Florence and the fleshpots of Rome to Greece to consult oracles and study sculpture under amorous Athenians. They travelled with horses, carriages, servants and a tutor-chaperone known colloquially as a ‘bear-leader’, and never went anywhere without their trusty Baedeker – the Rough Guide of its time.

Thomas Cook organised the first package tour in 1841: 570 temperance campaigners paid one shilling each for a return rail ticket from Leicester to a rally in Loughborough, 11 miles away, including entertainment, food and temperance beverages. Sounds like a fun do.

One hundred and nine years later, Russian Vladimir Raitz of Horizon pioneered the package air holiday abroad, offering two-weeks camping in Corsica for £32.10s, advertising ‘meat and wine with ALL meals’ – a banquet in the days of British post-war rationing.

Back-packing? Voluntourism? Your parents and grandparents were doing that back in the Sixties: kibbutz-ing in Israel, promoting peace, love and flower power on the hippie trail to San Francisco or following the Silk Road out East to build monasteries, meditate transcendentally and drop acid.

Space tourism is something new. A flight on Virgin Galactic, costs US$250,000 but it would be worth it to escape Spain’s orbit in August and put ‘crazy month’ and my excitable Irish temperament at a safe distance.