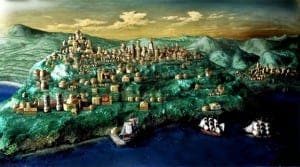 MALAGA has been chosen as the setting of Spain’s green-revolution in a new photo book.

Set to be released on the 500th anniversary of Thomas More’s Utopia, Ecotopia 2121 looks at 100 Green cities of the future.

In the book, London and Paris are chosen as early trendsetters, while Madrid transforms after Malaga embraces the green way.

“I am very happy to launch the results in such a colorful book after three years of research and writing, collaborating with some 30 artists,” Marshall told the Olive Press. “I strongly predict Malaga to be the vanguard of Spain’s entry into a new Green future.”

A university lecturer at Mahidol University in the Philippines, Marshall has dedicated his life to environmental studies.